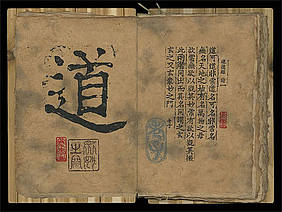 The Dao De Jing (= Tao Te Ching) is considered to be the founding text of Taoism and explains the Taoist philosophy and describes how to overcome many problems in life.

"Spokes join the rim to the hub,
but the wheel's use depends
on the hole in the center.

We make a bowl from clay,
but emptiness makes it useful.

We cut out doors and windows,
but vacancy makes the room habitable.

So what's there is advantageous,
but what's not is what makes it useful."

The Dao De Jing was originally written by Laozi (Laotse) without chapters. The integration of 81 chapters came hundreds of years later. Some chapters are easier understood when reading the previous chapter.

There are many ways to translate the book’s title, because each Chinese word has a few meanings:

Dào/Tao means “way”, “road”, “path”, or “route,” but was given the extra meaning “path ahead”, “way forward”, “method”, “principle”, or simply “the Way”. This word was also used in different ways by other Chinese philosophers (including Confucius, Mencius, Mozi, and Hanfeizi). It has special meaning in Taoism, where it means the basic way of the universe (that can not really be explained).

Dé/Te  means “virtue” as in “personal character” or “inner strength”. People who followed the teachings of Confucius used it to mean “morality”. A long time ago in English, “virtue” could mean “power” (as in the phrase “healing virtue of a drug”). The same thing was true in Chinese: the word meant “power” a long time ago but now means “virtue”.